How to Answer Interview Questions - Q63 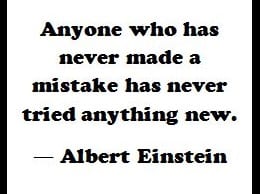 What have you learned from your mistakes?

This job interview question is an opportunity for you to show them that you’re a “growth” person…someone who learns from their mistakes and grows from it, developing into a stronger, smarter, better version of yourself.

If you keep it general, you want to focus on universal truths or character traits.  You can say that you’ve  made mistakes in the past, and realized that there are certain universal tactics that are good to apply in any given situation:  Evaluate exactly what’s going on.  Take in more than one opinion.  Sleep on it.  Don’t make rash decisions. Be persistent.  Show that you’ve matured and learned.

If they press you for an example, you need to be able to provide one, so you better have thought one up.  And it should always end on a positive note.

Give your example in the form of a brief story.  Use the STAR method to tell it…say what the Situation or Task you faced was, tell the Action you took that resulted in the mistake, and then go into the Results, or what you learned from it.  And then take your story to the next level by telling them (if you can) about how you implemented what you learned in a different instance and succeeded.  That gives you an even happier ending to your story.

You tried something, it didn’t go exactly right, you re-crafted it or made adjustments or did something different based on what you learned from the problems, and then you did it again and succeeded.

If you haven’t had a chance to redo that situation with your new-found knowledge, then the story you tell is about what you learned from it and how and why you won’t make that mistake again.

Both of these story structures will serve you well in the interview.

When you tell your story, be strategic.  Don’t say anything damaging to the possibility of your performing well in this role.  Choose something that isn’t so critical and then say what you learned.

One good example would be, “I made a mistake when I took my last job.  I wasn’t as critical as I should have been about what the job was really like, and when I got into it, it was completely different than what I should have pursued.  Because of that, it cost me some time in my career, and it cost that company as well.  I’ve learned to do quite a bit more research and ask more questions before I commit myself to a position.”

Another might be, “I made a mistake when I was supposed to take a customer to X event, and I didn’t send the final email.  (Or, “I didn’t give them my phone number”, or whatever.)  Because of that lack of communication, we missed the meeting.  I learned to be meticulous about my customer communication, because very often it’s those tiny details that make or break the whole thing.”