The Importance of Persistence in Job Searches 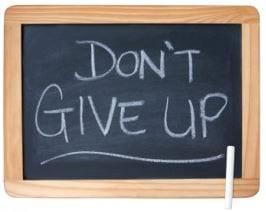 There is an old joke of sorts that defines recession as an economic period when your neighbor is out of work, and a depression as an economic period when you are out of work. The point of that is that for someone looking for a job the economy is never great. This is why persistence is so important for your job search. Without it, even in a great economy, you aren’t going to have much luck.

As an example; a young woman I know was looking for a job. She had been an intern at a company that wasn’t hiring, but she sent them a copy of her resume anyway and requested that it be kept on file. She called and checked on new positions every other week but the company had tightened up due to the economy. After 6 months of this, she went and placed her updated resume on file. The head of the department remembered her and they were chatting about some of the changes that had taken place in the year since she had been an intern. The young woman drove the three hours home. Guess what? There was a job offer from the company waiting for her on her answering machine. The head of the department admired her persistence in keeping after what she wanted.

This is a real world example of getting what you want by going after it. When a company isn’t hiring, politely request that they keep your resume on file and be sure to ask how long it will be kept. Then send another one. Visit the company, network with those who work there. Because many companies prefer to hire from within, consider taking any position that opens up with that business. Persistence is often the difference between a job and a career. It’s also often the difference between being employed and being unemployed.